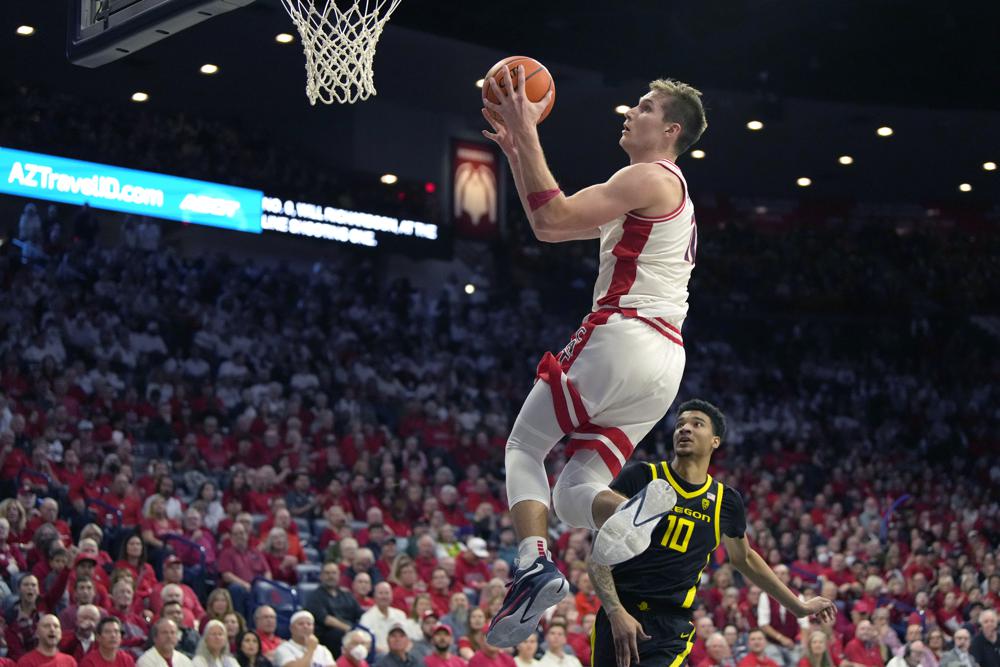 TUCSON, Ariz. (AP) — Azuolas Tubelis took his family and friends from Lithuania to breakfast in the morning, then to see the desert surrounding Tucson.

After a 40-minute nap, the Arizona big man arrived at McKale Center and started roasting Ducks.

Not a bad way to show off for his mother and sister.

Tubelis scored 40 points, most by an Arizona player in 28 years, and the fifth-ranked Wildcats avenged an earlier loss to Oregon with . . . Clark, who entered second in the nation in scoring at 27.1 points per game, was 13 of 19 from the field, including 6 for 11 on 3-pointers. She also had seven rebounds and eight assists.

It was the sixth time in her career that Clark scored 40 or more points. Mya Smiley is a student at the University of Akron thanks to an assist from LeBron James, and she is determined upon graduation to become a social worker that helps foster kids.

Her education and career path would not have been possible, the sophomore says, were it not for a scholarship and counseling that she received from the LeBron James Family Foundation. “He’s life-changing,” Smiley said.

For all his accomplishments on the basketball court — four championships, 19 All-Star Game nominations and an imminent coronation as . . . As LeBron James closes in on Kareem Abdul-Jabbar and is about to become the NBA’s career scoring leader the journey has included several memorable moments.

And there have been many. Many.

Through 20 seasons and four NBA championships, the list of James’ unforgettable nights is immeasurably long. But here are five that stand out.

The highest-scoring game of his career came on March 3, 2014, when James — playing with a mask to protect a facial fracture — toyed with the Charlotte Bobcats, scoring . . . James entered the day 89 points away from breaking Kareem Abdul Jabbar’s mark of 38,387.

James, a 19-time All-Star, had been listed as questionable because of a sore left ankle. Coach Darvin Ham told reporters about 90 minutes before tip-off that James needed to go through pregame warmups before the team . . . Philadelphia’s Joel Embiid, Oklahoma City’s Shai Gilgeous-Alexander and Portland’s Damian Lillard had to have known they were going to the All-Star Game. Players averaging more than 30 points per game typically don’t have to worry about not hearing their name called.

NBA coaches made them very happy. And probably made a few other guys very unhappy.

The reserves for the Feb. 19 All-Star Game in Salt Lake City were announced Thursday night. From the Eastern Conference, it was . . .